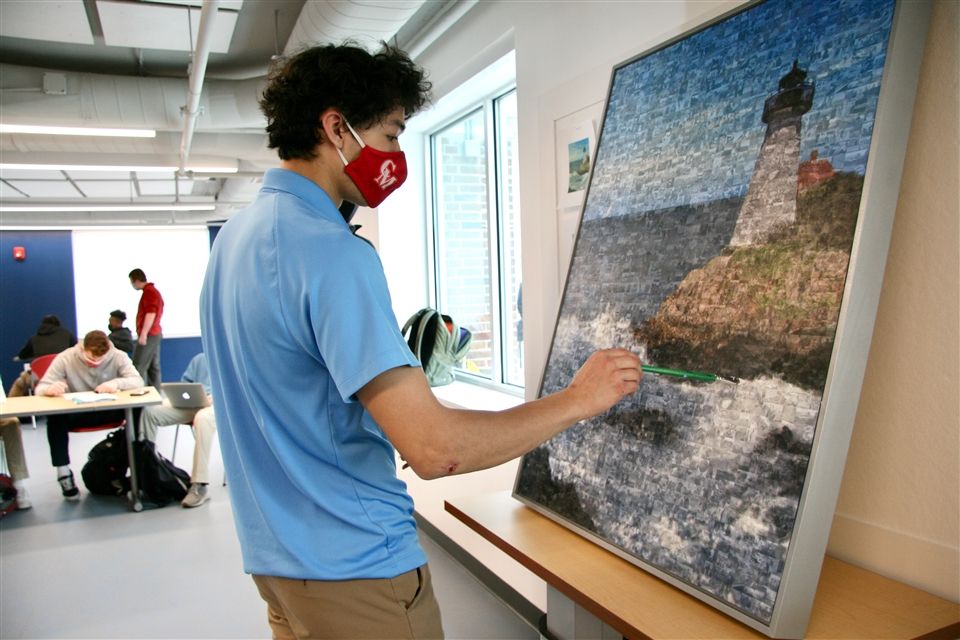 The Spark Within the Soul

8/1/2021
Creativity is at the intersection of knowledge, thinking and motivation. Three examples perfectly illustrate this truth and asks whether art is less of a discipline and more of an expression of complete education.
“Your spark,” says Joe Gardner, the main character in Pixar’s movie SOUL, “isn’t your purpose. That last box fills in when you’re ready to come live.” At CM, students come to live through learning or what is called Knight-Based Learning. KBL is built on curriculums woven together using different, and sometimes diametrically opposed disciplines that teaches new ways to think about universal problems or specific ones. From this comes the idea that creativity is the sum total of life, learning, and inspiration. The Lighthouse Project, Story Book Art, and the Parable Project all bring together multi-disciplines that feed into the final artwork. In short, what Joe Gardner says about the meaning of the spark. The spark doesn’t determine what you will do. Life does that. The spark is the catalyst when you decide what it is you want to do with what life has given.

The Lighthouse Project: An Expression of Hope Through Digital Art
For Fine Arts teacher Mr. Brian Sage, the idea of a hands-on project during the time of COVID hybrid learning meant that any new project would be mainly thought-driven. “Mr. Danso (High School Vice Principal) approached me and wanted to create a group project that focused on a certain, reoccurring theme in the book A Chance in the World by Steve Pemberton,” says Sage. It was the school’s summer reading assignment. In the book Pemberton, referenced lighthouses in his life – people who lit the way along his remarkable journey. “Normally, I would have thought about painting or making something to bring a physical aspect to the project. But given COVID, it needed to be a little bit more remote. Not hands-on, hands-off.” Sage came up with the idea of a digital collage. Students gave presentations to Sage providing examples of lighthouses. In addition, he asked them to go into their phones and provide two images of people, places, or even activities that meant something special to them…representations of their personal lighthouses. These images were then uploaded in Photoshop and resized to create a large contact sheet…a background to what would sit on top. “We then put a picture of a lighthouse on top of this tapestry of images and reduced the lighthouse’s opacity, so it was transparent.” The lighthouse ended up being a composite from about six different images followed by the rocks around it and then the ocean.

The project took direction from both Sage’s graphic design class as well as his landscape painting class. Why landscape painting? Because the next component of the mixed media piece was the hand embellishment. “Often in reproductions what artists do to increase the value of a print will be to hand embellish,” says Sage. “They'll actually put their hands right into that reproduction to bring out the highlights to add texture and make it unique. I had my landscape painting class come in, and I gave students different areas of the collage to hand embellish.” Placing clear acrylic paint in certain areas with titanium white and cadmium yellow in other areas to accentuate the sailboat and sea spray, students increased the texture, made parts of the image “pop” while not obscuring the collage of the many personal images.

In the end, the piece became a collective work from boys who would come to class, see the piece from the start through the process of becoming. They would provide feedback, insight, and perspective thereby supplying the full gamut of concepting, executing, and finally critiquing. Arriving at a piece that now sits in the entrance hall of CM and has been praised by the author of the book, Mr. Karl Danso, the commissioner of this piece says, “Students received an understanding through art that we all need people in our lives to support us during challenging times. Even those of us who seem like we have all the answers still need to lean on the people closest to us.”
Shadow Box Art: Explaining Academic Content Through the Medium of a Children’s Story Book
The inspiration for this senior project that Science teacher, Mr. Brian Mulcahey devised came from a combination of a workshop he took and reading the book Intention (a work that explores creativity for students to use creative expression to demonstrate content knowledge). Students were challenged to create a story on an aspect of the unit which they had taken in Mr. Mulcahey’s AP Environmental Science class and that represented their weakest understanding within the curriculum. For some it was biodiversity, others underwater ocean currents, and for others evolution. “In a sense, they had to self-assess the information that they weren’t clear on by creating a story so as to present it to, say, a seven-year-old,” says Mulcahey. Each student chose a subject, but every student contributed a page to that story. Peer review and voting would determine the winner which was done in the same way as the March Madness bracket. And the creative vehicle that would depict the visual content was a shadow box. Images that would go into their shadow art book were gathered and then laser cut. Cardboard boxes of 24” by 24” housed the figures and a flashlight was shone onto the figures so that their shadows were cast onto the back of the box. A photograph of the cast shadow was then taken to be included in the final story. The only constraint the students had was page count. It could be no more than the number of boys participating in the class.

Since this project was undertaken during a stuttered, pandemic school schedule what should have taken two weeks ended up taking three months. “But I think it worked out,” says Mulcahey. “We kept revisiting it, refining it, and through this, helped students develop a more critical eye.” According to Mulcahey, the self-realization his students gained working on something they weren’t strong in made them dig deeper, and by realizing that they were explaining this to a young audience changed their connection to the project from personal to a creator/client perspective – now it wasn’t for them; it was for someone else. “I read children’s books all the time with my daughter,” says Mulcahey, “and the ones that we like the best tell a complex story in very simply and concise way.”

This project was classic CM teaching: an environmental science class, testing students on what they are weakest in so as to make their understanding of the subject matter stronger through a unique method of absorbing the information by relaying the information through a picture book to a seven-year-old. Knight-Based Learning at its best. “People think creativity is just like a kind of freeform. That’s not necessarily true,” notes Mulcahey. “With most creative work there is a conceived plan. Something that provides direction. It could be a brief, an outline, or a sketch.” Or in this case a series of shadows.
The Parable Project: Christianity on a Cube
As a means to introduce the 7th Grade class to Christianity and the teachings of Jesus, Kevin Durazo, the Vice Principal of the Middle School, decided to educate his class through parables.
But how to make these lessons of, say, the prodigal son stick, while engaging a young mind? “So, with parables you kind of have to chew on them. Take time to understand their meaning and the lessons within,” says Durazo. “We needed a way to incorporate, the text, the meaning, and some of the imagery.” Putting this down on a flat piece of paper wouldn’t provide a means for a young mind to retain the information. And as a consequence, the message would be lost. “So, we had to dig in. And as a part of the project, we rewrote the story using modern, relatable imagery, since the way you cared for livestock two thousand years ago isn’t anything a child would know.” Durazo consulted with Mr. Mark Evans and Mr. Brian Sage on a potential creative vehicle. They came upon a cube. Six sides; space on which to place different aspects of the teachings through cutting, stenciling, and writing as a means of expression and understanding of the subject matter. But it needed something to tie it together. “The key piece of the vision was to put a tealight candle inside the cube. And, you know, going back to the purpose of the parables they're supposed to shine light on to our lives, and illuminate beyond.”

What ended up happening wasn’t in-depth, literary analysis for a 7th Grader. Or to their minds: teaching into the void. But the project took on a more, lengthy engagement with the parable of their choosing. “On a practical level,” notes Durazo, “having these guys work on a project involving so many different phases and facets differentiated the end product from many of their other classes. It was just good pedagogy. And on a human, spiritual level, it showed them that when we look at our lives what these parables open up is that what human beings truly long for seeking truth from our faith and finding forgiveness, love and redemption. The light that shines out is the parable, right?”