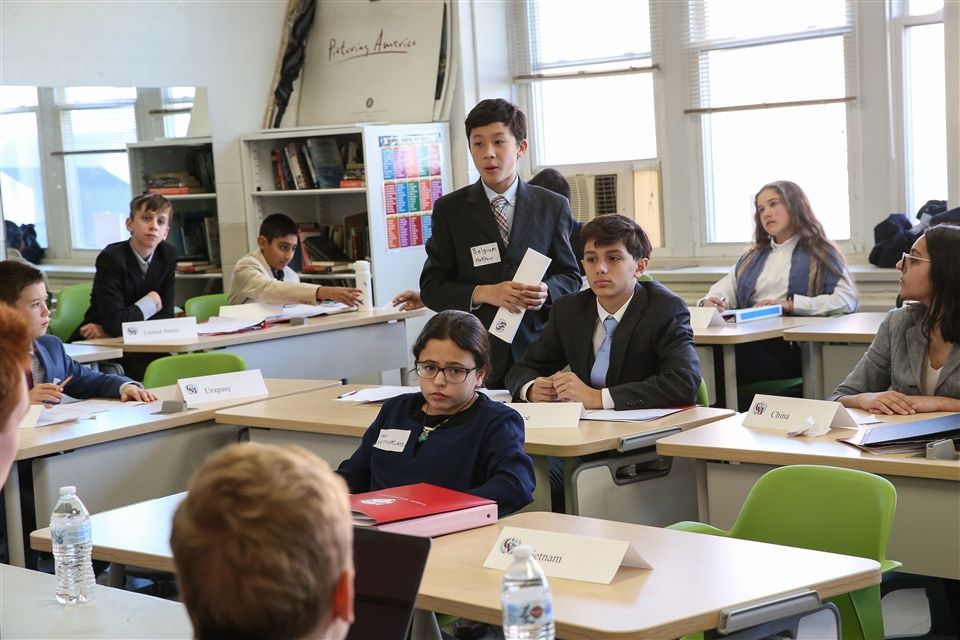 8/3/2021
At CM, going home after the final bell will get you some strange looks. What it won't get you, however, is the chance to tread the boards, gain serious public speaking chops, or experience how one of the world's largest governing bodies operates.
William Masferrer, a sophomore, stands in front of a computer screen in room 21. It’s 11 a.m. on a Saturday morning, but Will doesn’t care. He’s about to perform, albeit virtually, and whether it’s a weekend competition, this being the National Speech and Debate Association qualifiers, or a practice after school, Will is all in. Masferrer’s is a humorous performance piece about a boy returning home from college with his roommate
to spend Thanksgiving with his family. A self-proclaimed “quiet” person, Masferrer credits Speech
& Debate with much of his personal growth. “I joined in middle school mainly to help with public
speaking, and through it, I’ve found my voice in the classroom…it’s also made dinner table conversation
at home much livelier.” And that’s what this, and CM’s other co-curriculars have in common.

Whether it’s Theater, Speech & Debate (S&D), or, Model United Nations Program, they teach what traditional academics aren’t designed to do. Co-curriculars build confidence, self-expression, camaraderie, and the idea that to leave for home at 2:45 in the afternoon won’t hurt your grades but it may keep your horizons from expanding. Recalling his own years at school, Ralph Waldo Emerson noted, “Action is with the scholar subordinate, but it is essential. Without it, he is not yet a man. Without it, thought can never ripen into truth.”
As the head of CM’s Theater Program, Dr. Michael Corso points out that how CM describes its after-school programs complements its academic efforts. “We don’t call these ‘extracurriculars.’ We think of them as
‘co-curriculars.’ These stand alongside our academic program. They’re not ‘extra’ or add-ons. They are part of the mission.”

Masferrer takes a breath, composes himself, and begins. He nails the set-up and moves into character dialog, which he speaks all of the voices, moving between them as rapidly as his body and facial expressions shift in the ping-ponging back and forth. The cacophony is overwhelming, the energy explosive, and the idea that one student can execute a multi-speaking script impressive. What must the judges be thinking? Masferrer based the main character of Colin, the college kid, on a combination of his sister and Joe Swanson, the macho paraplegic police officer in the TV series Family Guy. A few trips to the bathroom mirror each week has Masferrer completely in control of these characters that are now a part of his persona. His coach and the longtime leader of the S&D team is Br. Anthony Cavet, who calls Masferrer’s piece “a subtle bit of social commentary.” Br. Cavet believes that co-curriculars can be seen in two ways. “The subjective way: ‘what are my perceived needs at the age of 14?’ Simple. To have fun. And that can be anything co-curricular, right? Going to a party…sitting around with friends. The objective way is the fact that certain boys choose Speech to do all sorts of things in real life communication. For some of these participants, it allows them to talk their way into whichever college they want.”
Masferrer is heating up, bouncing between characters switching voices doing his best not to flub or put the wrong voice to the wrong line. Now he’s Colin, who, through the course of Thanksgiving dinner, is trying to tell his family there’s something important he wants to share. Now he’s the college roommate speaking with a very affected voice. Now he’s a family member who suspects that what Colin is trying to say is related to his
roommate and that will ruin the entire gathering.

According the National Center for Education Statistics (NCES), a federal entity analyzing data related to education in the U.S., students who engage in these pursuits of passion have lower unexcused absences, own GPAs of 3.0 or above, gain the highest quartile on a composite math and reading assessment, and expect to earn a bachelor’s degree or higher. And they do so by comparison to someone who doesn’t participate by
more than 15-20 percent. “From our experiences here at CM,” notes Principal Andrew O’Brien, “students
who are involved outside of the traditional academic day are more engaged in their studies, manage their time more effectively and find greater levels of success in their academics. Co-curriculars allow our students to find their voice, develop meaningful relationships and foster stronger connections with faculty, staff and peers.” Vin
Bradley, Chair of CM’s History and Social Studies Department and the coordinator of the school’s Model UN program, sees these metrics put in context of new standard bearers maintaining the level of work that came before. “I’ve been at school at 8:30, the night before a conference where kids are going room to room making sure everything’s just the way they want it. There’s a level of expectation. I’ll say to kids, ‘schools that are coming here to compete aren’t coming because of you. They’re coming because of what kids did in the past have done. So, what are you going to do to continue that legacy?’” Bradley’s program puts students in simulated situations identical to the actual United Nations resolutions, solving either historical issues such as King Philip’s War or current-day issues such as the Amazon rainforest. Participants first split up into committees. These committees choose a topic, research the topic, then create roles so that participants can role play in order to solve the problem. The objective is to convince 50% plus one in the room to vote for your motion or resolution.

Dr. Corso also sees co-curriculars, and especially theater and performance, as a device for maturating students who decide to take the plunge. “Something one of my mentors at BC, who was an actor, and directed a lot of shows I was in, would always say to a young person wanting to act was ‘become a person first.’” Speaking a monologue to a panel of judges or making a case in front of students from other schools or portraying a character who is in stark contrast to someone’s private persona instills the ability to control fear, be humble in the face of mistakes, and to persevere when things don’t go as expected...not to be confused with
real life or anything.

For the students themselves, the lessons to be learned range from their long-term goals for high school: the taste of victory, and team-spirit. With respect to S&D, there is also the desire to claim a captaincy. Patrick Blomberg ’24 came from St. Joseph School in Needham into 9th Grade. “My main reason for coming to CM was because of its reputation in Speech & Debate,” he says. Blomberg is one of those climbing up the ranks. In the recent state finals, he earned silver and Best Novice in the category of Play, helping CM win its fourth overall
title in five years. “I look at this as the same calling an athlete has. The common goal of winning and the same drive. The captain’s spot is definitely my long-term goal.” For the outgoing S&D captains, Luke Esposito and Ben Kimball, who will enter this fall as freshmen at BC and Duke, respectively, what they leave behind is advice, legacy, and the love of handing it to respected, arch rival Shrewsbury High School. “It gets personal,” laughs
Esposito. “They’re (Shrewsbury) double the size of CM and they flood the categories.” “And if you’re not confident when it’s time to go,” adds Kimball, “then, you’ve already lost.”
If there is any takeaway, it is that co-curriculars put students into situations that mimic real life. They are forced to do something that challenges their tender state and brings about a battle-hardening of the character. It also gives them agency, and the feeling there are aspects in their lives
which they control.

As Masferrer reaches the crescendo of his piece, his face is moving so quickly in and out of character you’d think he was in High-G training, his voice grabbing the tell-tale tone and inflection of each member of the family as they all ask Colin whether what he has to say is anything related to his flamboyant guest. The tension is at a breaking point, until Colin reveals the truth and everything explodes into a Saturday Night Live-esque ending. Masferrer allows himself a smile, and it’s now all up to the judges.