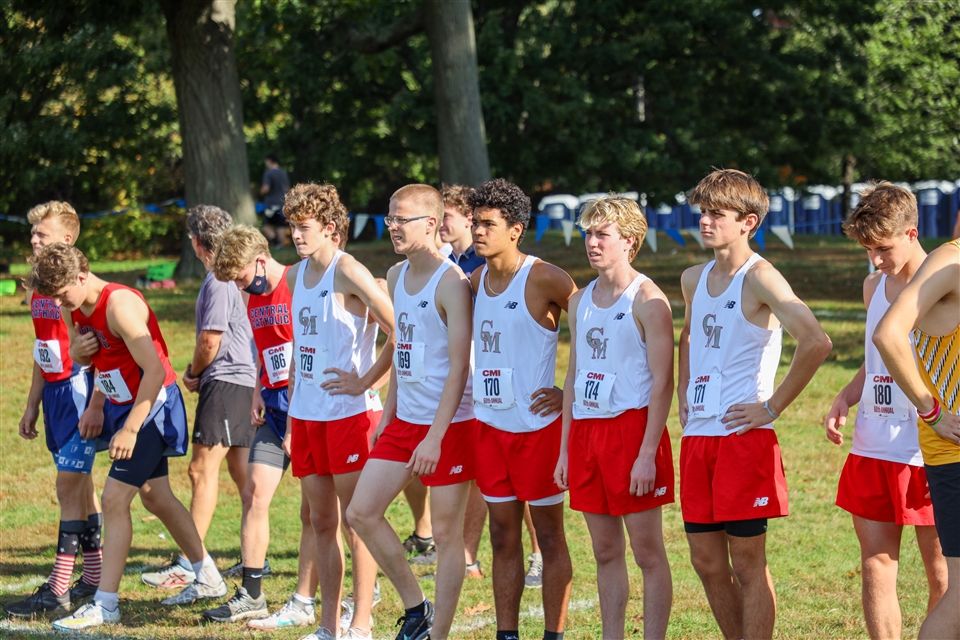 1/4/2022
The 2021 XC season was about one thing - getting to the state meet.
The last time the Catholic Memorial cross country team stepped on the start line for the MIAA Division 1 State Championship was in 2007 when most of the runners on today’s team could barely walk, let alone run. Yet, getting to the big race wasn’t enough for these harriers. It wouldn’t be judged a successful meet without at least a top 10 finish and in a packed field of high-quality runners, this would be no small undertaking.
Getting to the school’s first state championship in 15 years doesn’t happen without long runs, some so long that they went through the sites of the Battle of Lexington and Concord, challenging workouts that are tougher than the races, and meets against strong competition near and far. “ It was our number one goal as a team,” said head coach, John Finn ’89. “Each runner from one to 15 knew that they needed to work hard and push each other for 10 weeks, every day.”

Working as a team means carrying your teammates to the finish line. For individuals to get to the next runner ahead of them, it’s about training up so you’re running with the next fastest teammate, and not behind them. You could see it in Michael Bane ’22 and Joseph Connolly ’22, and Dean Simmons ’23 who in regular season races often crossed the finish line within 20 seconds of each other. Their in-race efforts to work together and push each other across the 3.1-mile courses resulted in this tight and winning formation.

By the end of the year, that idea along with the foundation built on their summer workouts allowed the Knights to decrease the time between when the first and fifth runner finished from 2:45 to 1:26. In the opening 5K against Xaverian, Simmons, the fifth-fastest CM runner in the race, finished with a time of 19:29.48. By the postseason, the top five runners all clocked times under 17 minutes.

But before the Knights could close the gap and score personal bests, the program’s past would be the focus to start the season. Former CM runners returned to Baker Street for a special ceremony prior to the September 17 football game against La Salle Academy. They came to witness the unveiling of the commemorative banners marking the team’s Eastern Massachusetts Championships of the 1960s and ’70s. As Athletic Director, Craig Najarian said, they were the men who started it all.

"Beginning in 1965, they rattled off nine of our 10 titles in that sport in what I would call a decade of dominance,” he said.

The banners were a long time coming for the members of those teams. Joe Flannery ’67, who was part of the beginning of the championship run, said that the banners were a recognition of a “significant accomplishment.”

“CM always had a strong cross country tradition, but those four years were particularly special. Under the remarkable leadership of Brother William Murphy, we established ourselves as the dominant cross country team in Massachusetts,” he said.

With respect paid to the runners of past teams, the current team was ready to make their own mark. CM runners impressed with a first-place finish in the Bay State Invite’s Green Division race, fourth place in the Manhattan Invitational’s E Division Race, and first place in the school’s very own Catholic Memorial Invitational’s Silver Division race.
Winning the race that bears the school’s name was of significance to the Knights as it was an improvement from a second-to-last place finish two years earlier, but their first win at the meet in decades.
One constant during the season was the running of defending Catholic Conference junior C.J. Sullivan, who earned first-place finishes at the Catholic Memorial Invitational, the Manhattan College Invitational, and three conference dual meet wins.

His championship season started with a first-place finish at the Catholic Conference Classic at Franklin Park. Sullivan, locked in a tight race, crossed the finish line at 15:48.1 to repeat as conference champion and earn conference MVP honors. Junior John Garvey came in 10th at 17:02.73 and was named a Catholic Conference All-Star.

The team, however, experienced a hiccup at the Division 1C meet when an ill-timed stomach bug forced Sullivan out of the race. The team finished in fifth place and earned a spot in the Division 1 meet. All that was left was to get that top 10 finish.

The last race of the year for the team proved to be the toughest. In a quick field across a slippery and muddy course at the Wrentham Developmental Center, the team took eighth place in Division 1 while Sullivan, using a conservative start with a fast buildup, finished in fifth place.

“The race overall, that was the fastest race I’ve ever been in,” Sullivan said.

While the Knights will say goodbye to four of the runners that ran at the state meet, the future is bright. The trio of Sullivan, Garvey, and Simmons will no doubt only get faster going into their senior year. Don’t be surprised to see those three ahead of the pack during the 2022 races.