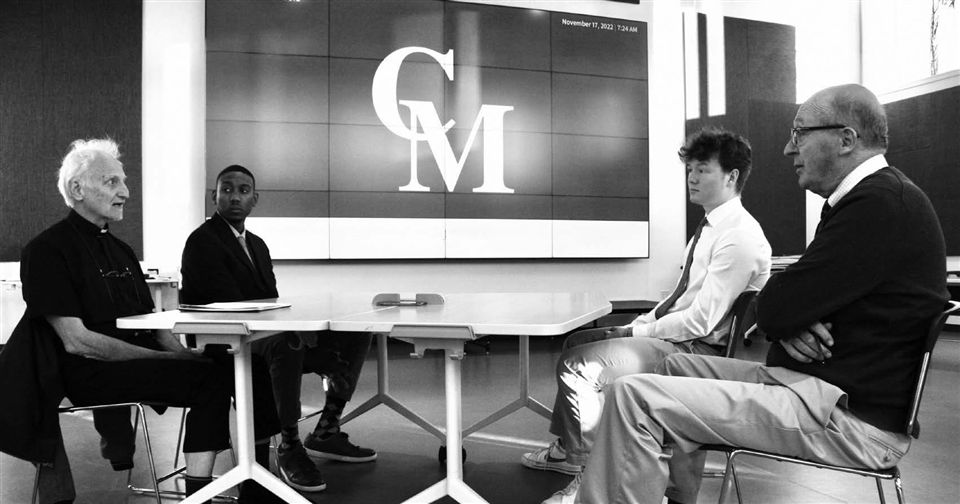 For some, it is a mantle, a cloak of tradition familially­­ handed down in the hopes that what it represents will be continued. But what if such a cloak doesn’t exist? What of legacy, then? Self-made greatness? If you were Howard Hughes or Rosa Parks, the answer would be yes: a legacy can be cemented through one’s own actions or even destiny and then be gone. But legacy also represents a person’s steadfast commitment to an institution. Such people form a human chain, unconnected by blood or family yet are a succession representing a power greater than themselves. Popes for example. Or elected heads of state. What does legacy mean to Brandon Twitty ’16, CM basketball coach, and member of CM’s advancement team. Equally, what does it mean to Brother Anthony Cavet, or Harvard-bound, senior Colin Bligh ’23, or even CM’s English teacher, Mr. Vin Catano P’01?

The question is set. All the panel need do is demonstrate its truth, hence Quod Erat Demonstrandum.­

How has legacy affected you and what does it mean?

Br. Anthony Cavet: I know the five founders of our school. And so, I do feel a responsibility to carry on the legacy, especially in these days when there are so few Christian brothers. In “X”-number of years, there won’t be any, and I understand that. And if the responsibility of carrying on that legacy is a burden, it’s a very happy burden, which is basically how I view my presence in and out of the classroom.

Brandon Twitty: As an eighth grader, thinking about changing schools from Randolph public to CM, I had no idea what legacy meant. My dad went here, he was the class of ’88, and then me going here was his way of being able to give me the same opportunities he had been given. Now at 24, it makes me feel good to know that I followed in the footsteps of my father.

Colin Bligh: Like Brandon, I came to CM not thinking about legacy. Over my five years, here, it just manifested itself. Both Brother Cavet and Mr. Catano taught my dad and my uncles. And so, if I’m not doing well in Speech & Debate, Brother Cavet will say, “Your uncle would have never done that.” And so, you step it up.

So as this “legacy” has grown, I’ve thought about what kind of impact do I want to leave on this place and how am I going to do my best every day to do that? I’m not thinking, “Today in calculus, I’m going to expand on my legacy.” I’m thinking how am I going to be a better person and leave this community better? And that’s kind of the legacy that I’m looking to leave.

Vin Catano: Well, sometimes legacy comes without you even looking for it. In my case, you just go day after day, which turns into year after year. And then it just takes on a life of its own. Years turn into decades. I’ve always been around CM. Several of my brothers attended. My brother Paul, the Class of ’68, was in the same class as Tom Beatty…a good friend of mine. My brother Michael, the Class of ‘71, which was the same year I arrived at CM having graduated from BC. I came…had an interview…was hired, and I’ve been coming ever since. And I look forward to coming every day. I look at legacy as a commitment.

Catano: It was easy because I was coaching, and we would have summer camp for running down at my house in Pembroke, and James would be with the students and be thrown around the bus when he was very young. There was never any doubt where James was going to go to school. And I enjoyed it. People said, “What was it like? Did you teach your son?” Yes, I did. What’s the big deal? I teach a lot of boys. He enjoyed CM and is so loyal to the school.

When you, Brother or you, Mr. Catano, think about having someone like Colin in your class does it cross your minds of those in his family who have come before him and whom you’ve taught?

Cavet: It’s on my mind, all the time. He [Colin] not only bears his father, he bears his uncle, and he has a whole bunch of cousins who I also taught.  So, yes, I actually do. For example, with you (turning to Brandon Twitty), I call you by your father’s name almost all the time. And it’s a very wonderful thing to look at them and to see not just them, which is plenty good enough, but the whole aura of witnesses, as it were, who surround them.

Catano: It happens without even thinking about it. It’s a realization that you’ve taught their parents, because there are so many fathers and sons who’ve come through here. So yes, you’re aware of it.

What does it do to the fabric of the school when generations pass through it?

Catano: Well, it’s more cohesive. I mean, everything kind of holds together.

Not to put you on the spot, Brandon and Colin, but were you to have children would sending your sons to CM be a consideration?

Twitty: Absolutely. I mean, I just see how it worked out for my dad when he was a student here as well as in the real world and now myself trying to figure it out. I think it speaks volumes to having not only father to son, but grandfather to father to son come through here. I think it goes to show how special this place is. I will want my son to have the same experience that I had and my dad had.

Bligh: Yeah, I mean, it’s certainly a ways down the road for me. But I’d be lying if I said I wouldn’t be biased for my son to come here. The way that my father approached the whole school selection process is like, “it’s your decision, you have to own it.” Obviously, he was a little biased and wanted me to come here. But in the end, you know, the apple didn’t fall far from the tree. And I found that this is the place that I want to call home. I would certainly love it if my son would do that.

Twitty: Just to piggyback off Colin’s point. My dad didn’t by any means force me to go here. I do think it speaks volumes of the place where we all, despite the fact we had family that went here, found our own paths as individuals.

What about the legacy of self, and the fact that CM gives you the opportunity to make something of yourself?  The self that you, Brandon and Colin, are in the midst of making, and the one that you, Brother, and you, Mr. Catano have made over time. What do you think about the self-made legacy?

Catano: As an example, I don’t think I can go one week on the commuter rail through South Station and not bump into somebody I taught. And they can recognize me easier than I can recognize them. And we’ll talk for a few minutes and catch up. And that’s the part if you’re in the city of Boston, and you’ve taught at CM for a while, the alumni are everywhere. And I see a lot of them in the North End.

Cavet: It’s a very automatic thing. It’s one of the joys of life to have something which you don’t have to work at, because it’s going to happen. I don’t think about my legacy. But it happens. And it happens before you know it.
Brother, would you say then that legacy is really a synonym for family and community in that it brings people together by its very weaving?

Cavet: There is a web, and it’s one that is certainly very rich. It contextualizes everything and makes all those connections that modern sociologists say that we need so important to have a healthy and happy and fulfilled life.

Colin and Brandon, to wrap up. What do think about CM helping you to create this idea of self-made legacy? Is it something you think about or is it as Brother and Mr. Catano have said unconscious?

Twitty: Even when I was here as a student, I remember faculty speaking so highly of my dad. “Oh, I had your dad in class he was this and he was that.” And hearing this all the time made me feel good, but I didn’t want to just be known as Troy’s son. So, I was like, okay, how are they going to remember me when I leave this place? If you’d ask me in eighth grade, that I would have scored over career 1000 points and have my name in the gym, I would have laughed at you. So having my name hang there forever, now that I’m back here working in the school, it is something that dawns on me for sure.

Bligh: Yeah, it’s what Brandon was saying: all four of us have had a hand in putting a banner up in the gym. So that in and of itself is a self-made legacy. Brother Cavet with speech and debate as well as myself. And then Mr. Catano with his track and field accolades and Brandon with his scoring title, as well as the banner for the basketball state championship. Those are legacies of yourself.

But you don’t think about making those. You think about doing something special, and then that becomes a legacy unto itself. Like, how am I going to make the school better? That’s the kind of the legacy you want to leave behind, at least I do. How can I help? How can I help that extra kid today? How can I make this place just 1% better? It’s how I’ve approached school life, here, and I know many others have.

Any friendly leg pulling you ever received from your uncle, your dad about following in their footsteps?

Bligh: Not really, but I do remember, by way of a legacy instance, walking in the door on one of my first days of freshman year, and Mr. Danso (’04) was doing roll call for the freshman experience. And he got to my name, and he said, “My man!” And I remember thinking wow, you’re not a nobody here. Everybody knows somebody.