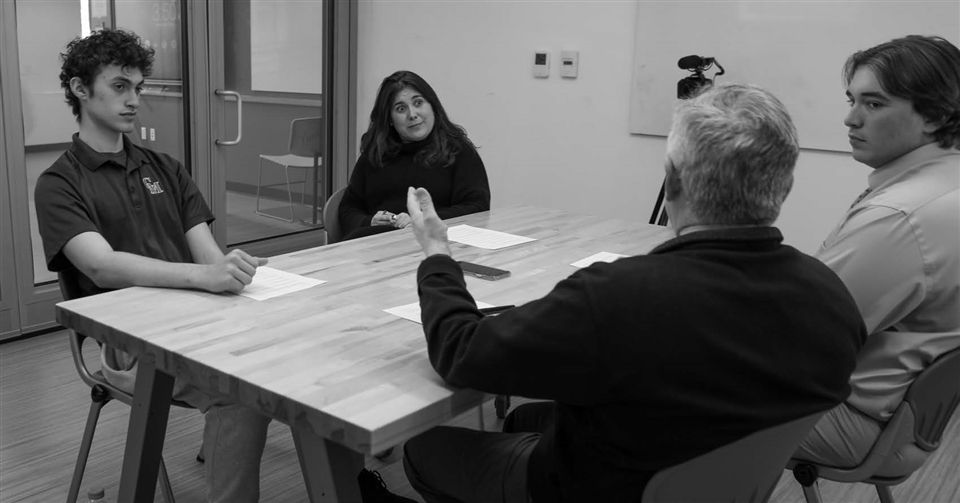 6/4/2022
Is technology and its flood of information robbing students of this “time” in their lives, or is it enhancing it? How are CM students navigating an age of “always on,” “24-7,” “real-time, anytime” data flow?

Apple began selling the iPhone in 2007. Facebook opened in late 2006 and by 2009, one third of Americans were on it. Some 15 years on, Elon Musk has argued that young people are already cyborgs whose personalities are now digital extensions of their human selves, housed inside and transmitted via their smartphones. Is he right?

The question is set. All the panel need do is demonstrate its truth, hence Quod Erat Demonstrandum.

Who, before 2016, would have said Tik Tok would be synonymous with depression? Facebook and cyberbullying a real thing? Screen time notifications monitored by parents and reported at the dinner table to bemused children would be the new mea culpa? And yet, they are. The surge in use of digital technology has changed life’s daily rhythms – in particular, for its youth. We invited graduating seniors Charlie Kettlewell and Sirio Jansen-Sanchez, as well as CM’s Theology Chair, Dr. Michael Corso, and Vice Principal, Megan Leahy to see how their perspectives can shed new light on this early century phenomenon.

Charlie and Sirio, how do you filter or prioritize the information that comes to you via your phone? Do you set aside time for this? Or do you react to it immediately?

Charlie Kettlewell: I always have my phone silenced or on vibrate. I don’t watch the news and so don’t have any news apps. To be honest with you, I just find it depressing.

Sirio Jansen-Sanchez: I have my phone on vibrate. But I got an Apple Watch for Christmas this year. And I know it’s going to open the door to a lot more of what’s happening right now. It’s hard setting up that protective wall. But on the other hand, it’s kind of nice having that access if something serious happens.

Does that mean you are having to override what is happening to you just so that you can act normal?

Megan Leahy: But what is normal? It’s just about the choices we make. When I was a kid, and a Harry Potter book came out, you couldn’t tear me away from it until I had finished. That wasn’t technology.

Michael Corso: I wonder if the issue is not “what is normal,” because it may become increasingly normal for people to be on their phones all the time. I mean, you guys are going to the prom, right? (Sirio and Charlie nod.) How many people at their tables are going to be on their phones? The question for me is what’s healthy? It’s healthy to read Harry Potter, but is it healthy to be staring at a screen for four or five hours? There’s something for me that’s different about those two experiences.

But a book has a certain number of pages, a movie has a set running time. But social media never ends unless you actually put the phone down.

You have to self-limit. There are a lot of Tik Tok videos of cats out there.

Jansen-Sanchez: When I was first getting to know technology, my main platform was YouTube. Instead of finding a cat video, or a news article, or whatever, I was learning new things like how does a car engine work? How to take apart a computer? What is a computer? I guess, it’s still not as healthy as reading a book per se but it’s a little bit more mental. Mentally healthy, I guess.

Corso: I think I learned that from you, Sirio. You were doing something to the stage…something you had to figure out, and you just instantly, like reflexively, went to your phone and looked it up. And then ever since then, if my dryer broke, for example, I look it up on YouTube. I don’t think I would have learned to do this had we not had that experience together. There is a way in which the infinite availability can turn out to your benefit if you seek learning. It’s healthy to do that. I’m not sure what we’re learning from cat videos.

As educators, how do you see your students being influenced or shaped by this sort of onslaught from the perspective of concentrating, being creative, or thinking deeply?

Leahy: Being bored in class and sneaking a quick Tik Tok video, doesn’t keep me up at night. What is starting to stress me out is wondering what that does to the brain? If that micro-moment is happening that frequently for a student, what are they missing? How long does it take to get back into the groove and focus when they’ve taken that brain break?

Corso: My concern is when there’s so much information, that even if you’re managing it well, how much opportunity is there to go deep on something? When I invite students to think deeply about something? Will I get 10 minutes? Fifteen minutes? How quickly will they become distracted, even if they don’t take out their phone?

Are skimming and absorbing, then, mutually exclusive?

Kettlewell: I think you have to care to absorb. To really absorb something and take it in, I feel like it has to have meaning behind it.

Corso: I like what you’re bringing up there, Charlie. It’s driven by passion. It’s driven by something that you care and are concerned about. It’s sad and troubling to think there’s lots of people who just don’t care enough. It’s part of a CM education to say, “hey, what do you care about?” Curiosity is part of the image of God in us. That desire to know more...it says that...at an intellectual level. What you’re describing at an emotional level is care. Curiosity is intellectual care.

Are smartphones taking away the desire to know things? Are they removing the wonder of the world and is that lessening our ability to care?

Corso: Wonder has become a mile wide and an inch deep. And we don’t have to wonder for very long. If any question comes up someone in a flash has their phone out and the question is answered. However, in theology there are those ultimate questions that we ask: what’s the purpose of this? How do you apply it to your life? I mean, those are not questions you can look up.

Leahy: If I think about my life, the times in which I’ve not wondered about something, but felt wonder and awe, a phone’s not there, a television is not there. And so, it goes back to balance. It’s up to me to not be robbed of being able to appreciate the actual world around me. I do worry about that: how much are we living virtually versus living out in the world that actually exists?

Jansen-Sanchez: I think it’s interesting when you think of your experiences of awe and wonder with no phone. Now, the generations that we’re raising won’t have that experience.

They will have things that they’re curious about, and they’re wondering about and they want to be in awe of, but they’ll look it up on Google, and they’ll see, “Oh yeah, here it is. That’s it.” They’re not going to go out into the world and actually try to discover it and experience it for themselves.

Kettlewell: Yeah, I think technology can definitely take away the small things in life that you don’t notice. But when you do notice them, they’re pretty great. You have so much access to knowledge that a lot of people feel that they just don’t need to go outside and experience it for themselves.

Jansen-Sanchez: In middle school, on the Acadia trip, you’re forced to put your phone away and go on a night walk. And on it, they start teaching about nature and talking about all the creatures. And as you keep going, you go deeper into the woods where it’s darker and the stars become so much clearer. So, I think if the kids were raised now have experiences like that, I think that’ll spark that feeling of awe and wonder and the need to be almost forced to fully disconnect from the internet and their phones.

To conclude then, has the phone and all the information in it become an extension of who we are. Is it our satellite personality?

Corso: I think so. If you’ve ever panicked, because you realize, “Oh, my God. I’ve left the house without my phone,” you know we are somewhere else. My Apple Watch tells me there’s only five minutes left in class. I don’t think about that my watch tells me to take my vitamins. I respond to commands from my watch. I tell my watch what to command me to think about and do at a certain time of day. I think we’ve already crossed the Rubicon into human machine integration. And now it’s just a question of whether the machines are going to be outside of us or inside.

Kettlewell: I think the best example of how phones are part of us is Misha Bane (’22). We all think, “How do you not have a phone? How do you function without it?” People who meet someone who doesn’t have a phone are just baffled by that fact. That reaction shows how most of us are so used to them that we can’t understand when someone doesn’t.

Corso: It goes back to the question of normality. Misha stands out as not normal. And yet, he’s one of the most normal kids you’d ever meet in your life. He’s not addicted to his phone. Not tied to it. He seems completely healthy around this issue. But you’re right. It’s interesting to think, in a world where everyone’s kind of mostly integrated with technology, someone like that totally stands out.

Leahy: I think the creation of a persona if you’re producing content on social media is fascinating. I see Tik Toks being filmed everywhere during our free time. I just wonder what version of that student is he putting out into the world? And what does that mean for a young person to be developing an alter ego, if you will? Is that what’s going on? Or is it more true to who they are? I don’t know.